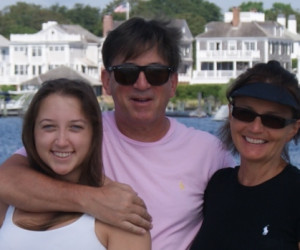 For many teenagers, taking on the responsibility of caring for an adult may seem unimaginable, especially when that adult is a parent.

But when she was 14, Claire Poirier of Toronto says she had to quickly step into the role of caregiver for her mother, Jane Holland-Poirier, who has early-onset Alzheimer's disease.

At 54, her mother was diagnosed with early-onset Alzheimer's, a fatal, progressive and degenerative brain disease affecting people under 65. Throughout her teens, Poirier, along with her father, Clarence, and older sister, Carolyn, acted as one of her mother's primary caregivers.

The family situation was not only difficult to balance with school and a social life, but created a new set of worries for Poirier.

Along with the thought of one day losing her mom to the disease, Poirier says she worried about leaving her dad and sister to take care of her mom on their own. She also worried about what others would think about her mother's condition.

"I didn't want anyone to look down on the family," Poirier said.

Adolescent caregivers, particularly teenagers, can face a different set of challenges than adult caregivers. A 2013 report from the Canadian Caregiver Coalition says young caregivers risk failing to acquire the social skills and education they need while balancing caregiving with school and a social life.

The report also says that for young people, taking on the responsibility of caring for a parent or family member often comes with "the negative effects of stress, anxiety and social isolation."

Dr. Peter V. Rabins, director of geriatric psychiatry at Johns Hopkins University, says that for teenagers, caregiving is difficult in part because it is unusual.

"It's a huge adjustment, even for very well adjusted kids," says Rabins, who co-authored The 36-Hour Day: A Family Guide to Caring for People who have Alzheimer Disease, Related Dementias, and Memory Loss.

No exact figures exist on the number of young caregivers in Canada, but a 2012 Statistics Canada report estimates that caregivers aged 15-24 account for 15 per cent of the over eight million total caregivers nationwide.

Even among that demographic, it remains unclear how many care for someone who has Alzheimer's or a related dementia. But as more Canadians develop these diseases, it's not unreasonable to assume that more adolescent teenagers will step into a caregiving role.

A 2012 report from Alzheimer Society Canada predicts that by 2031, the number of Canadians living with cognitive impairment, including dementia, may reach 1.4 million. This almost doubles the 2011 figure of 747,000 Canadians.

Rabins says one way people often come to terms with suddenly finding themselves in the role of being a primary caregiver is to simply think it through and rationalize it. But that can be a problem for teens.

"I think what makes it particularly hard is that kids don't often have that maturity to be able to intellectualize about it — to say, 'Well, even though I'm doing this for my mother she did this for me at one time,'" Rabins said.

But Poirier found ways to cope with her challenges. In addition to leaning on her father and sister, and joining a local support group, she serves on the committee of a charity event that raises awareness for Alzheimer's disease.

Young People Against Alzheimer's, a group co-founded by Poirier's sister and five friends in 2011, started an annual Toronto-based event called Memory Ball. The event's purpose is to educate young people about Alzheimer's disease and raise money for Alzheimer Society Toronto.

Video: Alzheimer's from the patient's perspective

On mobile? Watch the video here

With its fourth annual gala scheduled for March, Memory Ball has helped to raise over $120,000 for Alzheimer Society Toronto since its inception, according to the event's website. Poirier says she found an outlet through her involvement with the event.

"I've met a lot of people through that group," Poirier said. "Many people have been coming up to me and asking me questions because their parents are in the final stages of Alzheimer's disease, so in that sense it's been a great outlet."

Her mother now lives in a care facility, and Poirier says she's thankful for the kind of care she is receiving.

Poirier says she has matured "a lot more" than most 21-year-olds because of her experience. She also says it has changed her in another significant way.

"I'm now definitely big on giving back to the community, especially with Alzheimer's," Poirier said.