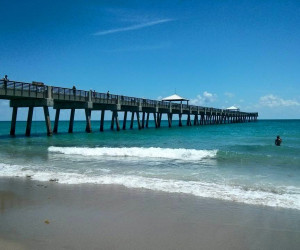 East coast or west coast? Atlantic Ocean or Gulf of Mexico? Sunrise or sunset? The debate continues to rage over which Floridian coast is the better choice. It’s no secret that many Canadians prefer the west coast, with its powdery white sand, minimal waves, and spectacular sunsets. But some would argue that the east coast has just as much–if not more–to offer.Here’s a few of our favorite east coast beaches (north to south) that you’re sure to enjoy on your next vacation to Florida.

Saint Augustine is not only a beautiful historic town (the oldest European settlement in the US), but its long golden stretch of beach has twice appeared on TripAdvisor’s Top 10 List. A climb to the top of the 140-year-old lighthouse provides a breathtaking view of the ocean and the surrounding coastline.

Daytona Beach is home to more than just NASCAR. A gigantic arch on the waterfront reads World’s Most Famous Beach, and while that may or may or not be true, Daytona is worth adding to any visitor’s list. Twenty-three miles of white sand beaches await you, and kids and adults alike will enjoy the food and amusement park along the Beach Boardwalk and Pier. For a really unique experience, you can even drive your car on the sand!

To sunbathe with the rich and famous, look no farther than Palm Beach Island. It’s a haven for “snowbirds” who head south to escape the cold northern winters, and for good reason. The water is warm, the beaches are sparkling clean, and everywhere you look, you’re surrounded by luxurious homes, resorts, and automobiles. It’s no wonder why it’s home more millionaires than almost any other community in the US!
A little further south, you’ll encounter the beautiful turquoise waters of Fort Lauderdale Beach. Although its glory days as a Spring Break “hotspot” might be over, this beach might be one of the prettiest in the entire state.

No list of each coast beaches would be complete without naming Miami Beach. If you can’t quite make it to Cuba or another Caribbean island this trip, Miami is the next closest thing. With an overwhelmingly Hispanic population, delicious food, and legendary nightlife, there is no shortage of things to do in Miami. The beaches are nothing short of spectacular, so grab your suntan lotion, get out there, and enjoy!