The top 5 Mexican sandwiches in Toronto 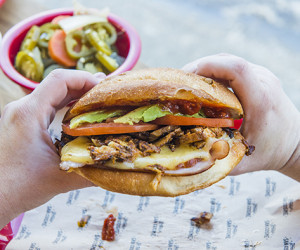 Mexican sandwiches, or tortas as they are traditionally called, can be found on the menus of some of Toronto's best Mexican restaurants. These layered morsels of deliciousness are served on crusty bread and filled to the nines with meat and vegetables.

Here my picks for the top places to chow down on Mexican sandwiches in Toronto.

Torteria San Cosme
This Kensington Market restaurant doesn't do tacos. Instead their menu focuses on the art of sandwich making. Indulge in tortas filled with everything from breaded chicken and manchego cheese to smoked ham and adobo pork.

Tenoch
Tortas are a house speciality at this St. Clair West spot. Telera buns are filled with tomato, onion, beans, avocado, mayo and cheese with your choice of meat like shredded chipotle pork or fried steak.

Fonda Lola
This West Queen West restaurants makes a wide variety of Mexican street style sandwiches - 9 different kinds to be exact, including their Torta al pastor, which is filled with Mexico City-style pork with beans, pineapple cilantro and onion.

Milagro
This Mexican chain's menu is filled with traditional offerings including three different kinds of tortas. Sandwiches are stuffed with ingredients like pork confit, tropical slaw, seared ribeye and guacamole.

Asada Mexican Grill
This St. Clair West restaurant allows you to customize your own tortas. In a step by step process you choose your meat, toppings and extras. Choose your own adventure.

What did I miss? Add your favourite torta restaurant in the comments.